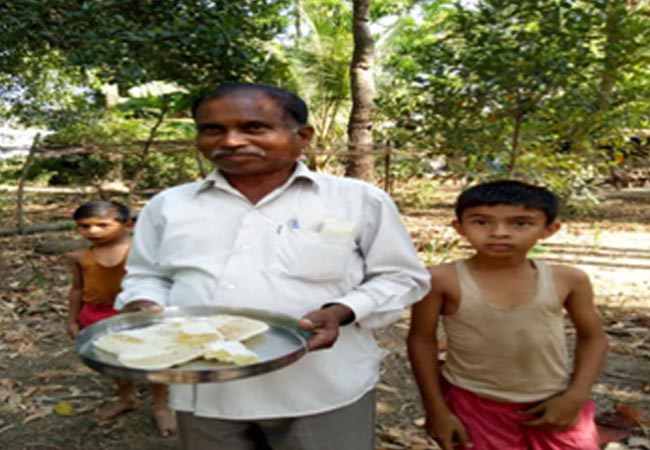 Bhaskar Jiva Rajad, 71, is a farmer from Patilpada hamlet in Vassa Village, Talasari Block, Maharashtra. He has a family of 5 members and his major source of income is through agriculture. As he learned farming from his ancestors, he has a good knowledge of agriculture andengages in traditional farming. He also owns a provision store selling daily utilities that is run by his son.

When UTMTS was looking to start the ‘BPR Programme’ in Vassa over a year back, few of the farmers referred Bhaskarji as a very active person taking initiative in every activity in the village. Thus, the UTMTS team approached him with the concept of “Beekeeping”.Amazed on hearing the benefits of beekeeping, he shared, “During these 70 years of my life I have grown up hunting bee colonies for honey, now having understood the significance of honeybees I wish someone would have intervened earlier in my life. We could have saved a number of colonies.”. Post the awareness session Bhaskarji was the first person to enrol in the ‘BPR Programme’. He encouraged other farmers to join the programme as well and today eightfarmers are doing excellent beekeeping in Vassa.

Bhaskarji has 5 filled beeboxes placed on his farm and since he has started beekeeping has extracted honey 4 times which amounted to 5 kgs, of which he sold 2 kgs of honey for Rs. 300 and 1 kg of honey for Rs. 800. Apart from extracting honey he has even witnessed the pollination impact of bees on his farm. This season Bhaskar got approximately 800 units of coconuts which isthe highest production up until now. In the previous yearsthere was an average production of 500 units of coconut.A 15% percent increase in the production of Guava was witnessed as well. The production of vegetables grown during the presence of the beebox are as follows: