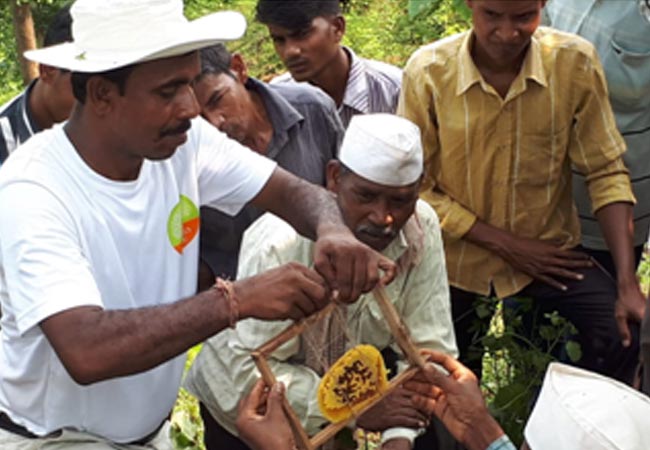 Madhubhai Bhoya,43, is a Technical Assistant working with Under the Mango Tree Society, living in Tutarkhed, Valsad with his wife and three adult children. He has a diploma in agriculture and owes 3 acres of agricultural land, of which his family earns an income of Rs. 60,000 annually.

Madhubhai, knew about beekeeping through word of mouth before he enrolled for the two-day basic training in beekeeping. He recollects, the initial two-three years were full of struggle and puzzlement, as the technical expert visited once in three months. But he continued beekeeping for honey. In 2012, hewelcomed the fact that bees impact yields as that year out of the 145 mango orchards in hisvillage, only he could harvest mangoes. In every mango orchard that year the flowers had died prematurely and had pest attacks except for his. He says, “I had kept three filled bee-boxes in my orchard and I credit bees for the alchemist role they played in pollination. I also had harvested honey from my bee-boxes that year”.

However, the crux of his course of beekeeping was in year 2013-14, when he experimented with sesame on 1 acre of his land. He describes, “It was summer and I decided to sow 1-kilogram sesame and do an amateur trial research on pollination impact of bees. I kept ten filled bee-boxes in the 1-acre land and had decided to not spray any pesticides. I regularly watered the land as and when required. I was elated when I harvested 135 kilograms of sesame. That year I observed that the stalks of sesame bended with sesame flowers on it, which I had never seen before. I was so thrilled that I used to invite people to see my sesame plot and feel allured”. That year he harvested 95 kilograms of honey which he sold to UTMT at Re. 280/Kg. He also sold 100 kilograms of sesame in local market at a price of Re. 80/kg and kept 35 kilograms for self-consumption. He recollects, “The results of my own experiment were unanticipated. I wanted everyone in the village to know about the potential spellbinding prosperity beekeeping promised me for future”. He had bought an electric motor from the money earned by selling sesame.

Discussing about his future plans, Madhubhai says, “I aim to increase the number of bee-boxes I possess and generate income from sale of colonies”. He says, “I am devoted to beekeeping for the rest of my life. Beekeeping has given me a direction in life and more importantly financial stability. I feel fulfilled when I can readily provide for all the needs of my family.”
© Copyright - UTMT Society