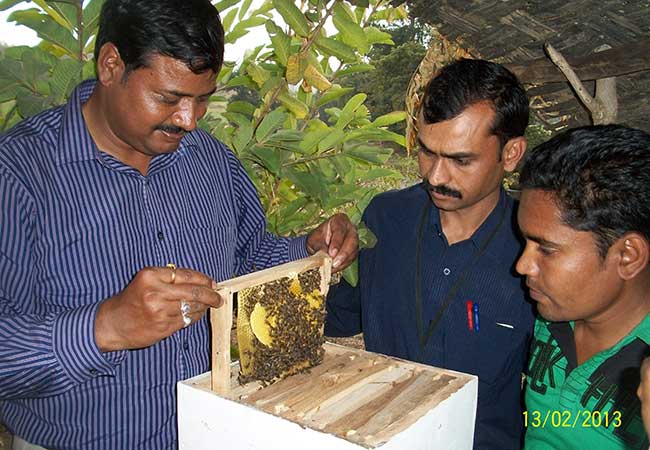 Atar Singh ji has chief involvement in the inception of UTMT Society with his extraordinary understanding in bee science. He has experience of over 2 decades in different parts of India and majorly at the honey hub-north India. I had heard of him from colleagues at UTMT Society. This time I got a heads up from our team lead about his visit. Tukaram ji (UTMTS technical head) and I had to accompany him through it. Tukaram ji always praised him; he had met him during his beekeeping training and spoke about the time with delight. This was one opportunity to learn from the best.

We received him and his wife early in the morning from the railway station. Our plan for the day included a couple of visits at our trained beekeeper’s farm and a day end meeting to know his insights/feedbacks in understanding the crux of the on-going project. We were on a field visit, gaining as much insight as we could from him, theoretically and practically. It was colony division/growth season so we performed a few of those in his presence to get feedback on technical performance.

We halted at a farmer’s house to sit and discuss more with the technical trainers. Atarji opened one of the bee boxes, lifted each comb frame with utmost care and patience without letting the bees know of any movement. It was magnificent to watch his keen observation during the scrutiny which indeed was much more than a glance. The explanations were so easily understandable. It’s true, to explain something in the easiest way possible, one has to understand it in depth. It is difficult to say whether the farmers were as inspired by him as I was.

“We can only keep bees if they like their house, not like cattle that can be tied forcefully; after all, they have wings. If bees don’t like the space to live and decide to leave, then nothing can stop them.” These examples were more than enough to look at bees from a different perspective, to empathize and improve beekeeping practices. “It is very important to understand honey bees likes and dislikes being a master beekeeper.”

One might have all the knowledge on bees but when it comes to practical situations, experience, and savviness play a major role whereas theories often go for a toss.
At the end of the day, all of us got together at the BRC (Bee Resource Centre) and sat down in a circle to hear more from Atarji. We discussed a few key points that he thought could be improved upon for a more successful and sustainable project.

He was telling us about his usual day in the field, the number of colonies they used to transfer in boxes; more than 10 colonies a day, all the farmers looked surprised knowing the efforts it requires to transfer just one of those. Spending every moment with bees throughout the day resulted in bees taking over his dreams. It was very relatable as a few days back I had also been dreaming of bees because of being on the field transferring colonies every day.

According to him, the final motive of conserving bees is to raise them in similar way cattle has been raised over the years. Of course, not all species of honey bees can be kept in boxes but it brings about awareness to conserve all bee species. Farmers have been raising cattle since generations by passing on the tradition and they can do the same with bees, it’s just that it’s going to take some time.